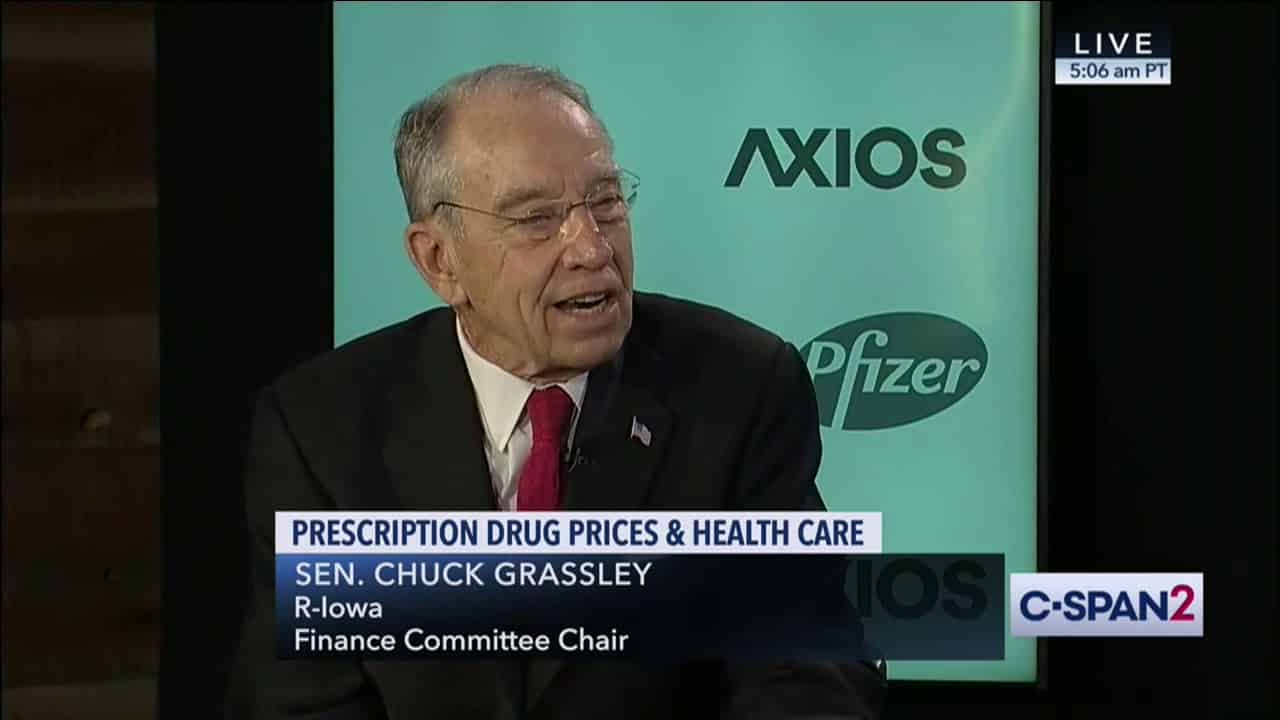 Just last week, the Trump administration delivered some surprising news. One of their flagship promises, to remove drug rebates related to Medicare and Medicaid, was being shelved. An array of reasons cited ranged from risk of higher insurance premiums to a potential upheaval of the entire system. However, there are still some who are convinced that the so-called “rebate trap” for prescription drugs is an even greater risk.

This is all part of the continuing debate related to drug pricing and no voice has been as loud as Chuck Grassley, Senator from Iowa who is also Chair of the Senate Finance Committee. We recently attended a panel discussion featuring Senator Grassley among other leading stakeholders, Beyond 2020: Making Care Affordable. While the other panelists lent their views from the perspective of advocacy and the administration, Grassley offered his legislative solutions. Here are a few takeaways from the last installment of our series summarizing this important program.

Need for transparency in pricing

Describing some drug prices as “ridiculous”, he commented on how this may be related to “too much secrecy in healthcare pricing” and demanded for more transparency. Much of this has to do with the role of the pharmacy benefit manager (PBM) and lack of disclosure related to the rebates negotiated with manufacturers. More about this later.

Keeping an eye on the “pay for delay scheme”

Like many advocates for lowering health care costs, Senator Grassley feels that generics play a major role and all barriers to their accessibility should be removed. He commented on the situation where a manufacturer of a branded therapy makes a deal with a generic company to hold off bringing the generic substitution to the market. This enables the brand manufacturer to maintain the patent price. His goal is to restrict “schemes that stop generics from getting on the market sooner.”

Reign in the PBMs and the “rebate trap”

Senator Grassley is not a fan of PBMs and their practices related to rebates (referring to them as “schemes”). Essentially PBMs negotiate rebates with manufacturers with the promise of a higher tier for their products on the formularies. A chief concern is that the ultimate price is shrouded in secrecy and  “shouldn’t the public know?” He also feels that in the end, they don’t benefit the consumer. “We want to make sure the rebate goes to the consumer in the case of Medicare but we want it throughout the pricing system.” This is based on the sentiment that the rebate benefits the PBM and insurance provider. But the consumer pays a percentage or even all of the original list price which is thought to be artificially inflated in order meet the demand for rebates.

Senator Grassley also cites a phenomenon known as the “rebate trap”. Essentially the more expensive a drug, the more likely the manufacturer is to be able to offer a hefty rebate. Since the drugs with higher rebates end up as higher tier, the lower cost i.e., generics tend to fall down the totem pole and end up as more expensive to the consumer in the end.

In the end, according to Senator Grassley, the issue of the PBMs all boils down to transparency and the need to “take the secrecy out of all this pricing”.

Improve access to innovative therapies for Medicare and Medicaid beneficiaries

In his final thoughts of the session, Grassley focused on ensuring that access to new and innovative therapies for individuals covered by federally-administered insurance plans. He stressed the need for low income “people on Medicaid can take advantage of life saving therapies like gene therapy.” Grassley suggests substantial changes to Medicare Part D, most specifically removing the incentive for pharmaceutical and insurance companies to get people through the donut hole and into catastrophic coverage. “The taxpayer covers 80% of catastrophic”. Rather, he wants to “take away that incentive by having the insurance companies and the pharmaceutical pay a great percentage of the cost and put a cap on out of pocket expense would be do.”

Overall, Grassley is confident that Congress should be taking the lead. He feels that a bipartisan solution can be a reality. We are skeptical that with a divided Congress and an upcoming 2020 election that the reforms Senator Grassley is championing will truly become a reality, stay tuned.

Snowfish is a strategy consulting company which serves the life science industry. We are often called upon to help our clients think in new ways whether it is their approach to stakeholders, landscape analysis, or other critical areas. Please reach out to us at info@snowfish.net to learn more.